A grocer in Anamosa, Iowa, had no easy way to get potatoes from his basement to the main floor of his store. The year was 1892. He went to the local machine shop, owned by John Kimball, the father of William (Willis) H. and Charles E. Kimball. The company was founded in 1883 and manufactured various types of scales. They agreed to build a freight elevator for the grocer and, according to the “Papers of the Kimball Elevator Company” at the University of Iowa Libraries, the Kimball Brothers’ Elevator Company was born.

In 1892, a petition, signed by seventy-nine Council Bluffs businessmen, pledged the brothers about $1500 if they would move their business to Council Bluffs. This incentive, plus the added convenience of the rail service, resulted in the construction of the Kimball Brothers’ foundry at 9th Street and 11th Avenue. While the company continued to operate a branch in Anamosa, the elevators were made entirely at the Council Bluffs factory.

Willis Kimball, secretary and treasurer, purchased the lots at 510 and 512 S. Eighth Street in 1899. In 1900, he and his wife, Carrie (Young) Kimball, built a large Queen Anne house on the lot at 512. The house, still standing, originally had a wrap-around porch; the address was 804 Sixth Avenue. The porch was removed in a later remodel, and the address was changed to 512 S. Eighth Street. In 1921, the Kimballs built a simple Craftsman house on the lot next door at 510 as a gift to their only daughter, Ruth, at her wedding to Walter Jenkins. The house remains, unchanged. Across the alley from 510 was the home of Dr. Donald Macrae, surgeon, who also served as mayor. The Macrae house no longer exists. 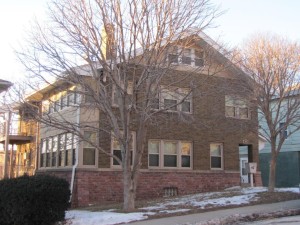 Charles Kimball, president of the company, and his wife, Jessie (Atkinson) Kimball, lived at the Ogden Hotel prior to building their Craftsman house at 102 Bluff Street. The Kimballs had two daughters, Florence and Lucy. The house was built as a duplex, with Donald B. Stoufer, managing engineer of Kimball Brothers, and his wife, Florence (Kimball) Stoufer living in the house as well.

Charles Kimball, who was also associated with the Kimball Tire Case Co., was an inventor. Among his many inventions were “steel tires and mud chains” which prevented skidding.

Clement Field Kimball, younger brother of Willis and Charles, graduated from Iowa State College with a degree in mechanical engineering and from the University of Michigan law school. He moved to Council Bluffs in 1895. He practiced law, served as Assistant County Attorney, completed four terms as state senator, and served two terms as lieutenant governor of the State of Iowa. He was the senior member of the firm of Kimball, Peterson, Smith & Peterson. Clem and his wife, Carrie (Williams) Kimball, had two children, John and True. Their home still exists at the corner of N. Second Street and Lawton Terrace.

As the Kimball families grew, so did the business. By 1928, they were turning out one elevator every day, and by 1953, they had manufactured 14,000 elevators. In 1947, they had branch offices in Salt Lake City, Los Angeles, Dallas, Oklahoma City, Gary (Indiana) Kansas City (Missouri) and Kalamazoo (Michigan). By 1955, they had offices in ten states. In 1928, they manufactured a high-speed push-button elevator capable of traveling 300 feet per minute. Their taper drum safety catch became a standard in the industry.

Every Kimball elevator was custom built. The orders filled included a 40,000 pound freight elevator at the J.I. Case plant in Racine, Wisconsin; the only elevator that operated at a 25-degree angle at the Pathfinder Dam near Casper, Wyoming; chair lifts for the handicapped; a gold plated elevator in a Hollywood home; an elevator to raise a large theater screen from a concealed floor-level position in the ballroom of actress Norma Shearer’s home; an elevator for inspecting mines at Fort Randall Dam in Pickston, South Dakota. This elevator, measuring seventeen feet long, eight feet wide, and nine feet high, was completely portable and could be moved from one mine shaft to another by a gantry crane which picked up the penthouse car and slipped it on and off tracks in each shaft (University of Iowa Libraries). The installation of the elevator at Cutler Funeral Home gave rise to this claim: “We give lifts to the living and raise the dead.”

In 1953, the O’Keefe Elevator Company of Omaha purchased the stock of the Kimball Elevator Company and continued to run the business until the early 1960s when the manufacturing plant was closed. Dennis O’Keefe had been an elevator installer for Kimball Brothers before going into business for himself.

The three Kimball brothers and their wives share one monument in Fairview Cemetery.