Soldier, gambler, landowner, community leader, confidence man, livestock grower, philanthropist – stories of Benjamin Marks have been kept alive for more than a hundred years. Some are true and some are just… stories.

Those who’ve heard anything of the life and times of Ben Marks know that he purchased the Minnesota building at the close of the 1898 Trans-Mississippi Exposition held in Omaha, took it apart, numbered the logs, tied them together, floated them down the river, and reconstructed the building. The truth is, it didn’t happen. In a 1905 Nonpareil interview seven years later, Marks tells of his plan to build a country home on his farm and cattle ranch south of Lake Manawa. When the Trans-Mississippi Exposition was held in Omaha in 1898, he was “very much struck with the Minnesota state building, an edifice built after the fashion of a log cabin, but was outbid by a man from Illinois. “His country residence will be a practical reproduction of that building, so far as (the) exterior is concerned.” 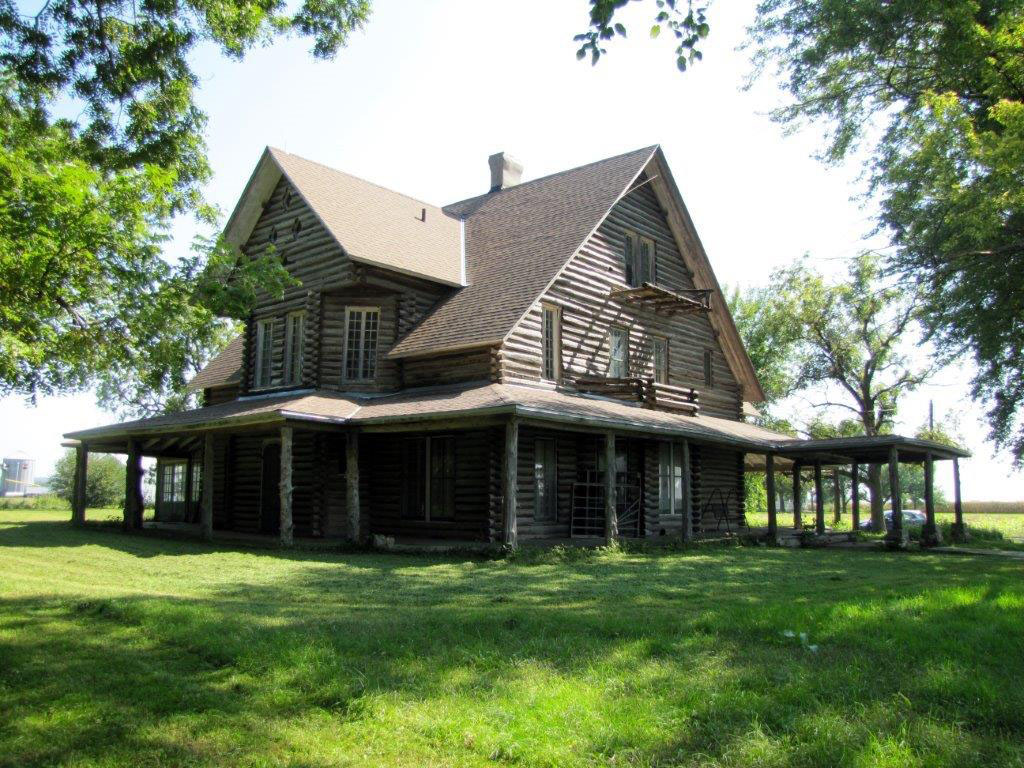 Other stories revolve around the days when the 5,356 square foot log house was a gambling parlor and brothel, built on the Pottawattamie County and Mills County line which allowed patrons to move to the opposite county if word came of an impending visit by a sheriff. But was there a brothel? No documentation was found, but maybe…..

Information for this article is taken from actual newspaper accounts written at the time of the event, obituaries of Ben and Mary Marks, and the “Review of Council Bluffs Park System, 1914, issued by Park Commissioners, Council Bluffs, Iowa”.

Ben Marks was born in 1846 at Waukegan, Illinois. At age 13, he managed to enter the Civil War where he served as dispatch bearer “with great credit”. After the war and while still very young, Marks made the trip overland to the west.

Mary Marks was born in 1856 at Center Point, Iowa. She married Ben in Chicago in 1882 and came to Council Bluffs. The city directories list their residence as 223 W. Vine Street, where the Omni Centre is today. Ben’s occupation was listed as “gambler”. An astute businesswoman, Mary managed the farm and livestock – which included a herd of elk- on their property known as Elk Grove, south of the city, and Ben operated gambling establishments while taking an interest in politics and becoming a community leader, supporting worthy causes.

According to his obituary, “During the palmy days of gambling in Council Bluffs, Marks owned and operated a place and was reputed to control the business of this character in the city. He was a power in politics at one time.”

Enter the John Mabray gang. Operating in thirty states and Canada, gang members came into the city to lure those with money into their confidence and then into betting on a sure thing. There were fake horse races, foot races, wrestling and boxing matches and wire-tapping. The events were advertised by mail.

In a nutshell, Mabray invited Marks to become part of the scheme. Marks built a one-mile horse racing track on his property and agreed to provide police protection.

The Mabray gang operated from three main headquarters: Chicago, Denver and Council Bluffs. When operations became suspicious in one city, the gang moved to another. They operated in Council Bluffs during 1907 and 1908 and then moved on. The day of reckoning came when two postal inspectors discovered the scheme. Mabray and his gang were charged with conspiracy to use the mail to commit fraud. According to the 1909 Annual Report of the Postmaster General, “..Mabray and 89 of his associates were indicted- believed to have been the most gigantic scheme of this kind with which the postal inspectors have had to contend”. The story made headlines in newspapers across the country.

The Ben Marks trial was held in Council Bluffs during the last three weeks of December, 1911. John Mabray was brought from Des Moines, where he had been incarcerated, to testify. Marks’s attorneys were Emmet Tinley, assisted by George Wright, W. E. Mitchell and John P. Organ. The Nonpareil published detailed reports each day of the trial.

During Mabray’s lengthy testimony, he related that Marks had ensured police protection for a cut of the profits, and told of several visits to the Marks home to deliver the payoff. Two telegrams implicating Marks, dated 1907 and 1908, were introduced as evidence. A number of the victims who had lost a great deal of money also testified as to their experiences.

Among the community leaders speaking on behalf of Ben Marks were Dr. Donald Macrae, Ernest Hart-president of First National Bank, members of the Commercial Club, and others.

The jury found Marks “not guilty”. According to the Nonpareil, the jurors considered two major points in reaching their decision: that Mabray was an accomplice in the alleged conspiracy and that Marks could not be convicted upon his testimony alone, and that the telegrams were barred by the statute of limitations. The jury was unable to determine that Marks was guilty beyond a reasonable doubt. Benjamin Marks went free. The chief of police lost his job.

The gambling ceased after the Mabray gang left Council Bluffs in 1908, and Ben Marks directed his attention to his land holdings in Iowa, Nebraska and South Dakota, and to his livestock operations. According to his obituary, “He took an abiding interest in religious matters. In a characteristic fashion, Marks quietly advanced worthy movements and contributed to their success.”

The 1914 publication, “Review of Council Bluffs Park System” issued by Park Commissioners reports that the Nathan P. Dodge Memorial Park tract now totals 139 acres, including the section donated the first of the year by General Grenville Dodge and Benjamin Marks.

Ben Marks died of liver disease in April of 1919 at his home at 223 Vine Street. Mary sold their interests in Council Bluffs and Mills County, lived in Kansas City, Denver and Florida, and moved to Los Angeles where she lived for two years before she died in 1928. They had one daughter, Josephine, who lived in Waukegan, Illinois. Their ornate monument is on the first street going up the hill in Fairview Cemetery.

The log house with its eight bedrooms and five bathrooms still stands on a secluded 5-acre lot off I-29 and the Bellevue exit south of Council Bluffs. In the 1920s, Berne Hopkins established a major hog and dairy operation there. Through the years, several families have made it their home. The property is for sale.

Details of the trial are available in the Nonpareil articles on microfilm in the Council Bluffs Public Library. Coverage by major newspapers can be found by searching “Ben Marks, Council Bluffs” on the internet.