Fayette Orlando Gleason (better known as F.O.) was born in New York in1839, according to census records. Laura Atkins was born in England in 1853. They were married on November 21, 1870 in Pottawattamie County.

Gleason came to Council Bluffs about 1860. His obituary states, “There was little of consequence in Council Bluffs at that early period, the place being the resting place or objective of the pioneers that have added so much to the history of the west. Much of the territory that is now in the city was at that time just rough trails.” 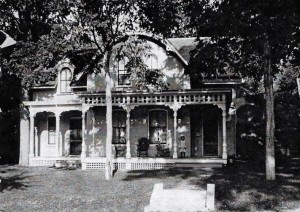 F.O. Gleason was listed in the 1969 city directory as living on Glen Avenue, but no house number was given. He purchased the property at 445 Glen Avenue c.1869-1870 and built this home for his bride.

F.O. Gleason held several occupations. He was engaged in the hardware business, according to his obituary, being a member of the firm of Hays & Gleason; he was co-owner of a grocery store; the 1900 census listed him as a capitalist. He was treasurer of the Council Bluffs Handle Factory and vice president – and later, president- of Citizen’s State Bank which became First National Bank. For a number of years, he was a director of First National Bank and a heavy stockholder in that institution. A civic leader, he was a member of the Commercial Club, and he was the first to sign the petition asking the Kimball Brothers Elevator Company of Anamosa to come to Council Bluffs. Mr. Gleason was a member of St. Paul’s Episcopal Church. Gleason Avenue is named for him.

The Gleasons had three children: Gracie, Gertie, and Harrison. F.O. Gleason died of pneumonia in 1918 at the age of 79 in Washington, D.C. He and Laura had left Council Bluffs in March to visit their daughter, Mrs. Guy Shepard, in Chicago and their son, Harrison, in Washington D.C. (The Shepards were cousins.) They were about to return home when he was taken ill, according to his obituary. His son (Harrison) and daughters (Mrs. Guy Shephard and Mrs. Edward Shepard) were present when he passed away.

Laura Gleason lived in the house until her death in 1934. The property stayed in the Gleason family until 1954 when the property was purchased by Lucy Beall and Richard Graeme who lived here for 41 years.
The Gleasons are buried in Walnut Hill cemetery. 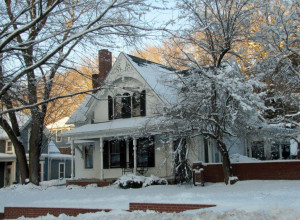 The two-story brick house exhibits the Gothic Revival style in the steep pitch of the roof gables, the elaborate decorative wood gable screens, and the round-arched windows on the second floor. The original porch had been replaced by the early 20th century with a Colonial Revival/Craftsman-style porch; the original porch posts had been in storage and were replaced by the home’s second owners. A Craftsman-type cantilevered porch hood with exposed rafter ends and knee-brace brackets dating from the early 20th century remains over the front side entry door (National Register nomination of the district). Other details of note include the2/2 double-hung windows and the gabled wall dormer with a single round-arched 2/2 window on a side-gabled ell. The house has five entrances. The shutters are not original; they are absent in the photo of the original house.

A two-story attached garage replaced the original carriage house in 1970; the new garage has an apartment above and was built in a style compatible with the historic house.

The Gleason House is within the Park/Glen Avenues Historic District and, according to the nomination of the district, may also be individually eligible to be listed in the National Register of Historic Places.