The tiny house at 517 Fourth Street was the home of Jean and Inez Bregant who met while performing in a vaudeville show at Coney Island, New York. They were married in Council Bluffs on Christmas Eve, 1905.

Jean and Inez were perfectly proportioned “little people”. Jean was 46 inches tall, Inez was 42 inches.
Jean was born in Austria in 1869, one of five children. His parents and siblings were of average size. He began his theatrical career at age 21 and toured Europe for 15 years as a popular singing comedian. In 1904 he came to the United States with a five-month contract at $100 per week and spent the year on the vaudeville circuit. He returned to Vienna, and the following year he accepted a contract that brought him back to the United States and to Coney Island where he met Inez. 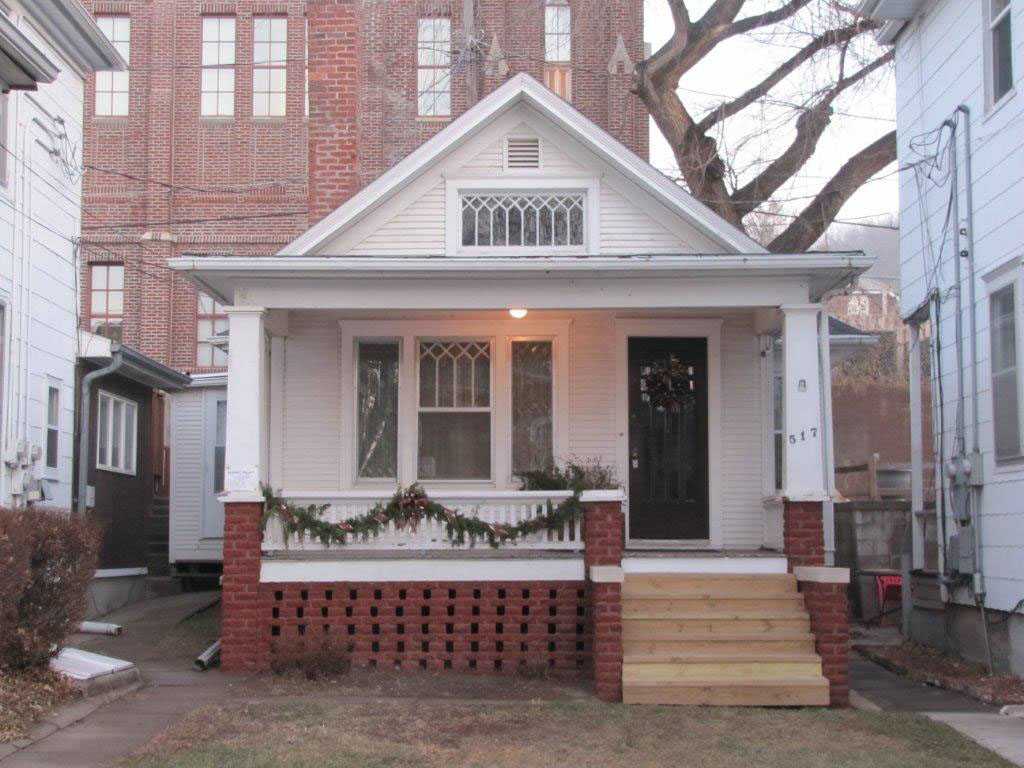 Inez was an only child, born in Denver in 1887. At two years of age, she came to Council Bluffs with her parents. As a child, she enjoyed singing and dancing and was a pupil of Professor Chambers, a well-known teacher in the Council Bluffs/Omaha area (Nonpareil, May 9, 1926). At age 14, she was discovered while performing in a local talent show and offered a job with the Keith and Proctor Vaudeville Show. (Years later, she told a reporter, “It was a lucky break for me. I weighed only forth-five pounds then, and had wondered what I was going to do” (Nonpareil, January 21, 1962). She traveled the United States as a member of the Royal Lilliputians.

After their marriage, the Bregants continued to perform as a couple, eventually returning to Council Bluffs where Inez’s parents operated a grocery story on Eighth Street.

On a visit to the Woodward Candy Company to place an order for the store, they met the company founder, John Woodward, who hired them to be the company spokespersons. They were nicknamed the “Candy Kids” and ultimately had a twenty-state territory of their own. Their images were seen on advertisements and company products throughout the country.

Later, they operated the candy department at the former Beno’s department store. After retirement, Jean became involved in real estate, owned considerable property, and became an active member of the community.

Their home at 517 Fourth Street, built-in 1912, is described as a simple Craftsman Bungalow, popular in the early part of the twentieth century. It was built to fit the narrow lot and still provide living space for the small couple, yet large enough to accommodate their average-sized friends. Ceilings and doorways are of normal height; the fireplace, dining room hutch, bathroom fixtures, and kitchen appliances were all scaled to fit the stature of Jean and Inez.

The house was purchased by Preserve Council Bluffs with a $50,000 donation from an anonymous donor – $45,000 to purchase the house and $5,000 for restoration. The beveled and leaded glass windows have been restored, the brickwork on the porch has been rebuilt with the lattice-work (part of a later remodeling) replaced by bricks placed in the original pattern (see photo). The wallpaper has been replaced in the bedroom, dining room and living room.

The nomination to the National Register of historic places and restoration work thus far has been funded by grants from the following: the Iowa State Historical Society Historic Resource Development Program; Pottawattamie County Community Foundation; the Bea Cox – Vera Ellsworth Trust; the Mathiasen Foundation (for the planned restoration of the bathroom); individuals, fundraising tours by Preserve Council Bluffs, and many in-kind donations by Preserve Council Bluffs board members and others.

The house, designated a Local Landmark, is listed on the National Register of Historic Places.
Additional photographs can be found on the Bergant Page.