Catherine Beck (spelled “Cathrina” on the cemetery monument) was born in 1830 in Holstein, Germany and came to Davenport with her parents in 1854. Henry and Catherine were married in Davenport that same year, and came to Lewis Township near Council Bluffs where they purchased 240 acres from a Mormon farmer. They set up housekeeping in a small log house that was built by the Mormons to be used as a church. There Henry worked the land and Catherine raised their eight children: John, Fred, William, Mary, Henry, Elizabeth, Carl and Wilhelmina. 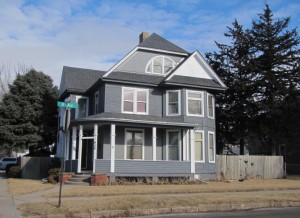 By the early 1890s, the Spetmans owned 960 acres, a large home, and considerable property in Council Bluffs which included four houses and three brick buildings. They were ready to move to town.

Their lovely Queen Anne house at 930 Fourth Avenue was built in 1895. Other members of the family lived there as well. Their son, Henry, had formed a partnership with Fred Holst in 1878 and operated the Kiel Hotel “when it was one of western Iowa’s leading hotels”, according to his obituary. He lived in the house on Fourth Avenue for the rest of his life.

Other members of the family shared the home. Elizabeth lived there and, in later years, Wilhelmina and her husband, Frank Fox, were listed as members of the household. Other family members lived nearby. Mary married Fred Holst’s brother, Diedrich- they lived at 500 Fourth Street. William C. and Antoinette lived at 706 Bluff Street. Carl and Martha lived 15 miles south of the city (according to the census and city directories). Fred married Alvena Laskowski ; they lived at 722 Bluff Street, on the corner across the street from her parent’s home on Ninth Avenue. (Around the 1980s, the historic Laskowski House was a bed-and-breakfast known as the Robin’s Nest Inn. Eligible for National Register listing, it was destroyed by fire in 2014.)

The notable Queen Anne features of the house include a wrap-around porch, cross-gables with the dominant gable facing the street; decorative shingles; a two-story bay window; a cantilevered wall extension on the west side and a lunette window in the upper story. The only structural change has been the removal of the porch posts and spindles in the 1970s when the porch was screened in; since that time, the screens have been removed.

Henry Spetman’s obituary states, “Mr. Spetman has always been a public spirited man and for several years represented his township as a trustee.” He was also active in local politics. The Spetmans were members of the German Lutheran Church.