This is the story of Maria Mynster – wife, mother, midwife, land owner and astute business woman – who was, by all accounts, ahead of her time.

Maria Jensen Mynster’s story began in Copenhagen, Denmark, where she was born in 1821. She married C.O. (Christopher) Mynster, also born in Copenhagen, and twenty-five years older than she. Their only son, Wilhelm (later known as William), was born in 1843. The family came to America in 1846 and lived in Washington D.C. for three years, then in Louisville, KY for one year.

In 1850, C.O. set out for the California gold mines and stopped in St. Louis where he bought a stock of goods. He reached Council Bluffs too late to continue west, and traded off his stock for a large number of claims of Mormon residents who were about to leave for Salt Lake. Some of the land was located in bluffs covered with trees, some was on bottom land. 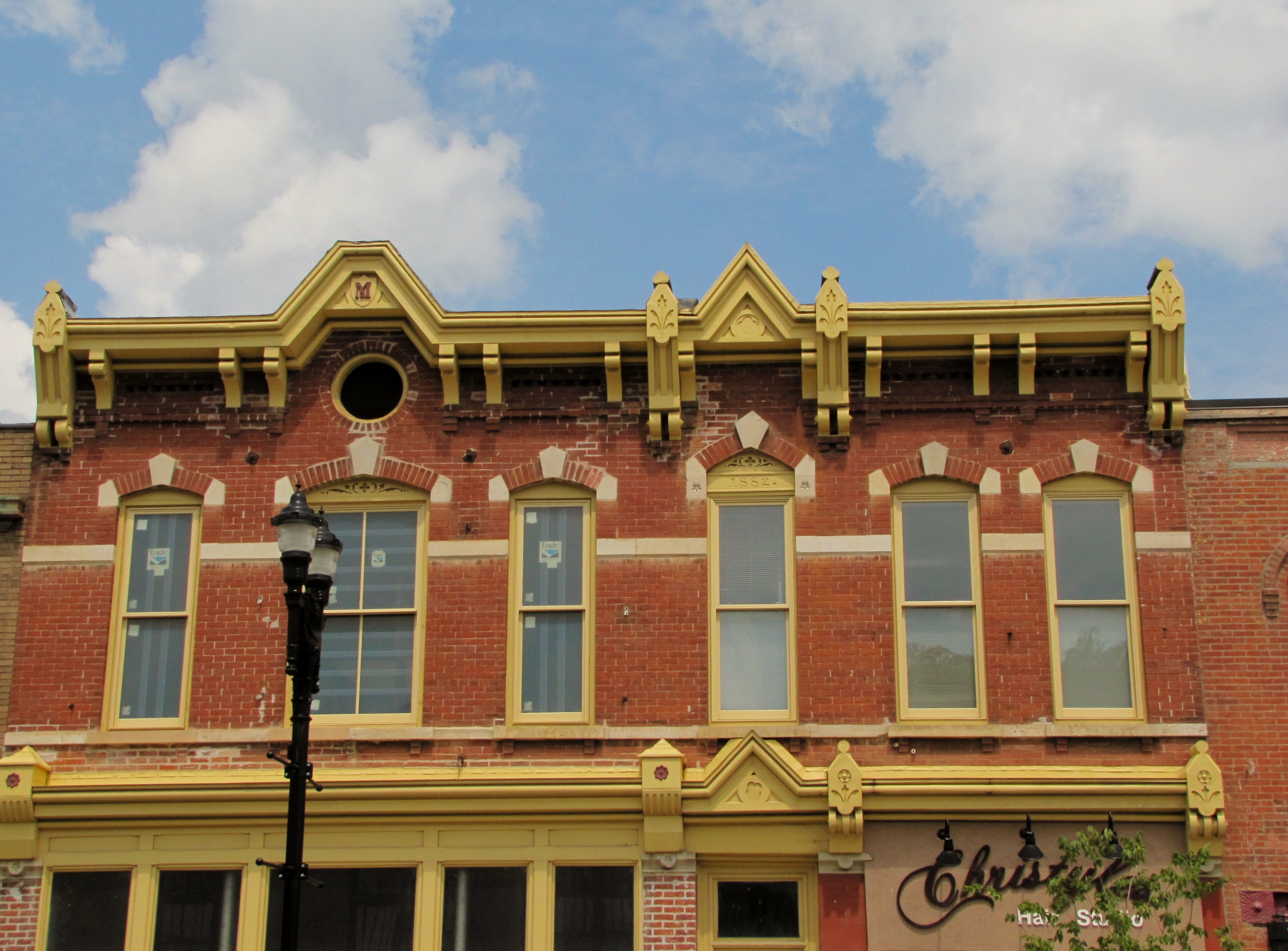 The Mynster Building-one of two built by Maria Mynster in 1882 in the historic 100 block of West Broadway. The signature “M” is visible
above the round window in the second story. The building on the south side of the block no longer exists.

He brought Maria and young William to Council Bluffs the following year. They were the first Danish family to settle in Pottawattamie County. C.O. opened a merchandise store (The Washington Store) in the building that later became the Ocean Wave Saloon (now the site of the Broadway Methodist Church). Maria advertised her services as a midwife, stating that she “received her diploma from the best physicians in Denmark”. Their future looked bright. One year later, C.O. Mynster died of cholera.

Taking advantage of a difficult situation, claim jumpers took most of the land that C.O. had acquired. Maria took charge. Although she was not able to regain the stolen claims, she bought land that, it is said, forced the establishment of the first United States Land Office in Council Bluffs in 1853. The first person to register in the new Land Office was Maria – the Mynster Addition, from which she realized a profit. She continued to buy land until, at one time, her land holdings extended from North Eighth Street all the way to Crescent. In 1882 she erected the Mynster buildings, one on each side of Broadway. One still stands today, on the north side of the historic 100 Block of West Broadway. The “M” remains above the round window in the second story.

Her son, William, attended St. Louis University and graduated from the Albany School of Law in Albany, New York in 1865. He returned to Council Bluffs where he practiced law, served as Pottawattamie County Attorney, as president of the bar association, and as president of the city council. He also established the Council Bluffs Fish Hatchery. His home was near DeLong Avenue and Mynster Springs Road by the “big spring” that still today feeds Big Lake.

Three houses were home to Maria. The first was on the corner of South First and Pierce Streets, opposite her husband’s mercantile store. The house no longer exists. It was replaced by the present house (100 South First Street) sometime after the property was sold in 1892.

Her second home, built in 1868, was a “fine residence” (as described by H.H. Field in his History of Pottawattamie County) on the southwest corner of Washington Avenue and Scott Street. This house also no longer exists.

By 1887, she had moved to the home of her son, William, by the Mynster Spring. She died there in May of 1893 at age 72. The address is listed in various city directories as Mynster Park, Mynster Springs and “near the Council Bluffs Fishery”. The original house has been extensively remodeled by subsequent owners to its present-day modern style.

The following is a favorite family story: “William Mynster owned the 27 acres on which the house was located. He allowed Indian families to camp on his land and the children all played together.”

The Mynster identity lives on: Mynster’s Addition, Mynster Place, Mynster’s Benton Street Addition (each comprised of several blocks on the north side of Broadway), the Mynster building, Mynster Street, Mynster Springs Road, Mynster Springs Bottled Water (no longer produced, but 24,000 gallons of mineral water appear in the records in 1894), ….

A remembrance of the abundant springs that are part of the history of Council Bluffs was installed at the site of one of the springs at Big Lake Park and dedicated in 1935 by the Council Bluffs Parks Board. Although the fountain was closed off in the 1950s, the plaque remains by the tennis court, on the bank beneath the railroad track. On it is inscribed this poem:

“O traveller, stay thy weary feet;
Drink of this fountain pure and sweet;
It flows for rich and poor the same.
Then go thy way remembering still
The wayside well beneath the hill,
The cup of water in His name.”

Preserve Council Bluffs acknowledges the following sources of information for this series: National Register of Historic Places nominations, the reference department of the Council Bluffs Public Library, the auditor’s office of the Pottawattamie County courthouse, homeowners, family members and individual research and, for this column, Joyce Mynster and Barbara Schlott.