Today’s LEGO aficionados would have had a field day. Others would have hired a contractor to put the house together. Either way, a mail-order house from Sears Roebuck & Co. was a good investment.

Prior to 1908, Sears sold furniture, appliances, and nearly everything else to put into a house. Between 1908 and 1940, Sears also sold the house. Offering approximately 450 designs – from very small cottages to farmhouses to mansions – around 100,000 of these houses were manufactured, sold, and shipped all over the country to wherever rail lines were available to deliver them.

These houses could be ordered exactly as shown in the catalog or according to the customer’s specifications. They came equipped with modern conveniences such as electricity and indoor plumbing or without – depending on the buyer’s wishes. One thing was guaranteed: the lumber and other materials were of the best quality. The materials were shipped in segments, timed to arrive when the builder was ready for them. They came with 75 pages of instructions. Among the reasons that Sears houses were so popular were the quality of the materials, the affordable cost, and the speed and ease of construction- since Sears houses pre-dated power tools. Everything, including such items as shingles, windows, doors, hinges and nails, was included. 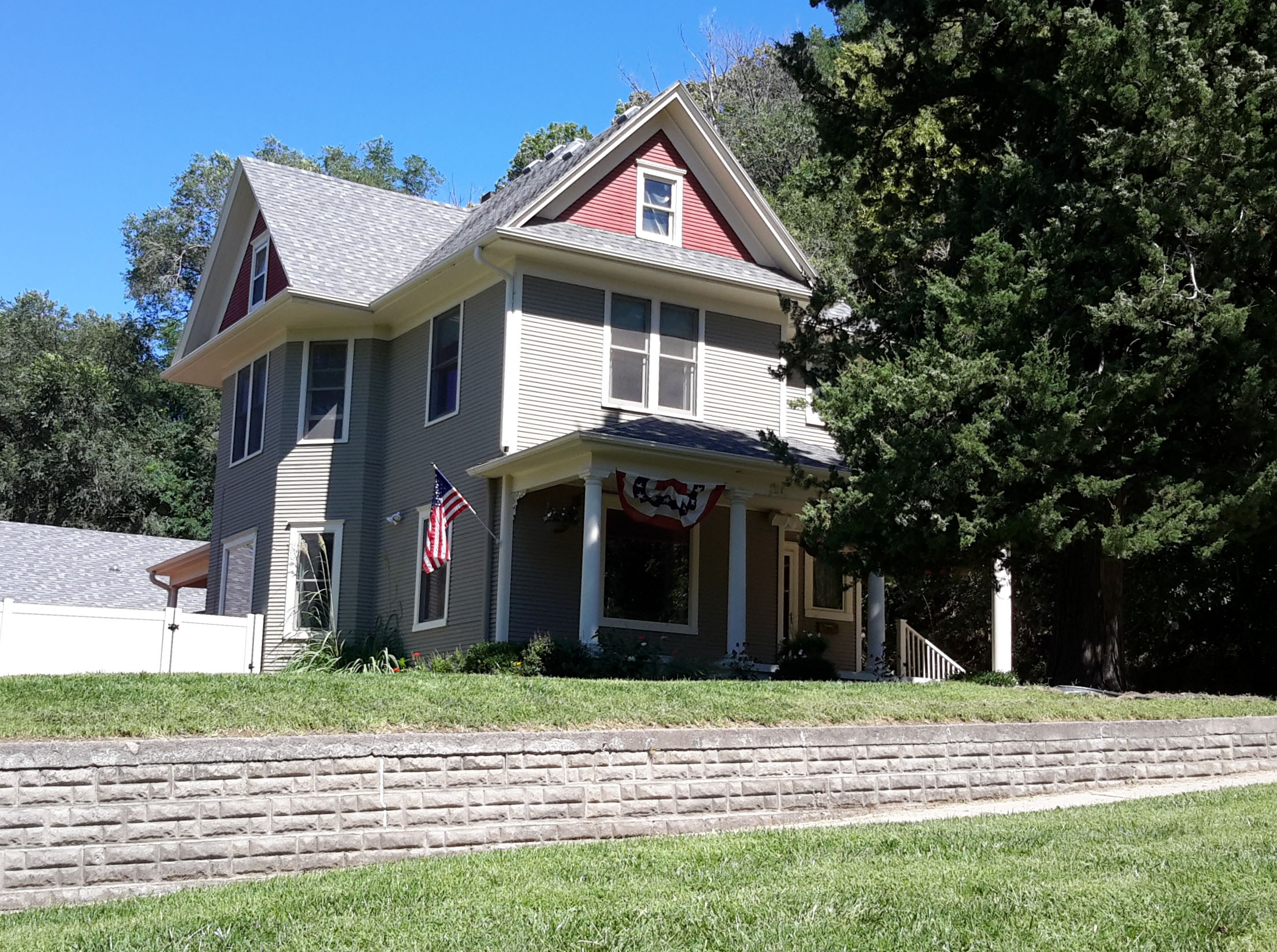 Many were designed in the Craftsman style, filling the need for sturdy and affordable housing for middle-income families. An entire area of a community might consist of Sears homes. In the latter part of the twentieth century, young people started restoring large Victorian houses to fill a housing need and often found that the house could be traced to Sears Roebuck & Co.

Undoubtedly, many of these houses exist in Council Bluffs and surrounding communities, their owners often unaware of their origins. I know of at least two near my own home town of Imogene, once served by the Wabash railroad. One has recently been demolished.

While Sears never kept a record of to whom it sold homes, the company archives provide tips on ways to identify a Sears Roebuck house: typical five-panel oak inside doors; hexagonal bathroom floor tile; each piece of pre-cut lumber was numbered; the plumbing fixtures and door handles would be marked with the initials SR; title records might list Sears as the original mortgage holder; and the catalog sketch could be compared to the finished home.

An article published in the Omaha World Herald (reprinted from the Chicago Tribune) on December 5, 1997, described “a battle brewing between two Illinois towns over which gets the mythical title of Home of the Homes. Sears homes, that is”. The winner, to be known as the Sears Home Capital of the World, would become a major tourist attraction.

The towns involved were the small town of Carlinville, Illinois, and the Chicago suburb of Downers Grove. During World War I, a severe winter caused a shortage of coal. Standard Oil decided to sink two mines near Carlinville to “fuel its refineries”, creating 1,000 jobs and a need for housing. Standard Oil ordered 156 houses in eight styles – the largest order ever received by Sears. Sears named one of the 1918 models “The Carlin”. The story goes on to say: “While the homes, constructed in a nine-block area called the Standard Edition were not luxurious, a survey of housing for coal miners in Illinois conducted in 1919 by a Tribune reporter concluded that Carlinville ‘has a reputation for having the best miners’ houses in Illinois.’”

In 1990, a member of the Downers Grove Historical Society recruited a retired home remodeler and part-time teacher to help identify the Sears homes in the village. They identified 75 for sure, and another 100 that they were “pretty certain” about. Each had its own identity. The surveyors did not find two homes that looked the same. Some were “pure luxury”. They were determined that Downers Grove would win the title.

Although the article did not reveal which of the two communities now holds the Sears Home Capital title, Sears homes – if they can be authenticated – have greatly increased in value, home tours have seen a dramatic increase in attendance, and promoters of tourism are happy.

The home featured here, at 190 Twelfth Avenue, was built in 1911. The 1912-1913 city directory (the first directory that lists persons by street address as well as by names) lists Richard Messman as the occupant. Very little has been changed from the original house, as shown in an early photograph. Windows have been replaced, the porch railing- once replaced with an iron railing – has since been removed, and the porch columns have been revised. Once converted to apartments, it was later the home of Jeanne Sorensen who, at one time, operated a museum in the house. It is now a single family home.