Simon Eiseman was born in Bavaria in 1847; Henry was born in 1850. Their parents were Joshua Eiseman and Fradel “Fannie” Dannebaum Eiseman, both born in Bavaria. The brothers came to Council Bluffs in 1861and opened a wholesale and retail clothing establishment. An 1866 engraving of the Clothing Hall shows the small store next to William Groneweg’s grocery store with people gathered in front of the buildings, horses and wagons waiting, and cows in the street. The clothing store was first established as Barnard & Eiseman. 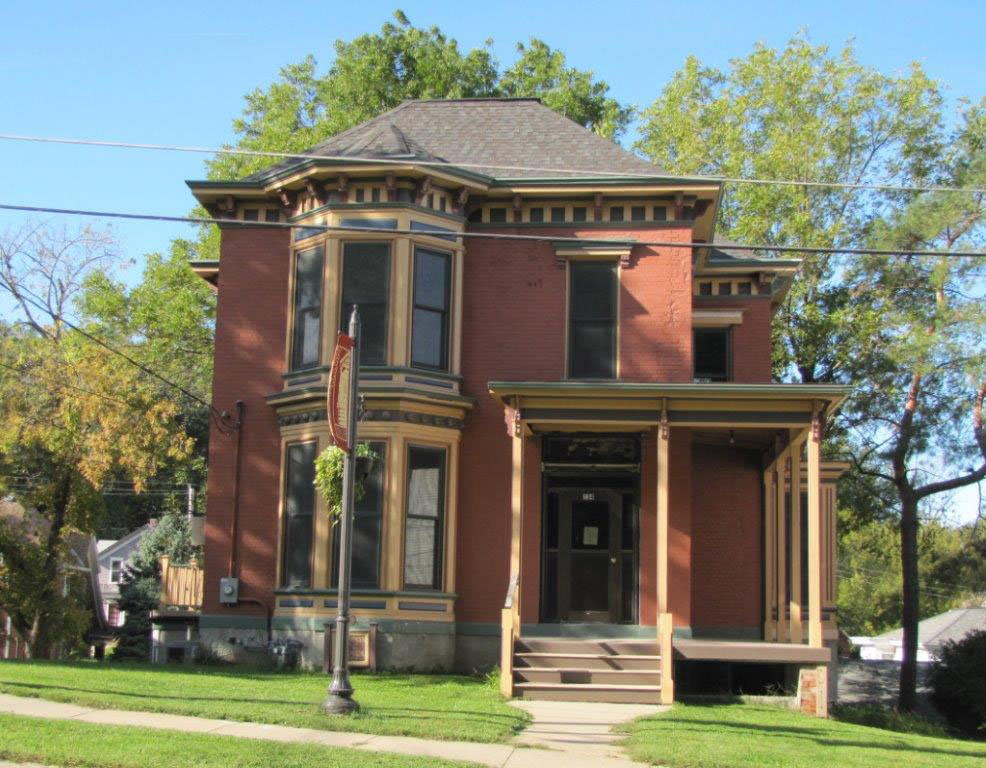 In 1875, Simon Eiseman purchased Mr. Barnard’s interest and the name of the firm changed to H. Eiseman & Co. It was located at 408 Broadway. Henry Eiseman resided at the First National Bank Building and Simon lived on the corner of Center and Buckingham (now Fifth Avenue and Sixth Street) “near the Thomas Jefferis House”, according to the city directory. The business grew.

Simon Eiseman founded The Hebrew Society. In 1887, when German Catholics built St. Peter Church in order to preserve their culture, Henry Eiseman & Co. was listed as one of the contributors from the community. In 1889, Henry Eiseman & Co. erected a new four-story building at Broadway and Pearl Streets.

Simon and Esther (Dannebaum) Eiseman were married in Council Bluffs in 1872. In 1882, they built a new home at 134 Park Avenue. The two-story, high style Italianate brick house has a low-pitched hipped roof, bracketed eave overhang and decorative frieze board, bracketed hoodmolds above the windows, and a two-story rounded bay window. The original house had a wrap-around porch.

Henry Eiseman & Co. failed in 1890; the stores closed and the house was sold to Ella and S.P. MacConnell who lost it in 1894 –likely as a result of the recession of the early 1890s. The Eiseman building was occupied by Western Iowa College for several years. In 1900, the building was purchased by the John Beno Co. and the address was changed to 501 West Broadway (from Chub Beno). The Eiseman’s People’s Store at 316-320 West Broadway was purchased in 1907 by the Bernsteins and the Krasnes and re-opened as “The People’s Store”.

After their stores closed, the Eisemans moved to Utah (some sources say Colorado) where they owned a silver mine. By 1900 the Federal Census shows the family all living in St. Louis. No record of Henry’s death was found. Simon died in 1906. Esther died in 1941. Burial was in New Mt. Sinai Cemetery & Mausoleum in Afton, St. Louis County.

By 1950 the house was converted to apartments. In 2006, the present owners purchased the house, which had been unoccupied for several years, and are restoring it to a single-family home. Park Avenue is located in the Park/Glen Avenues Historic District and the house at 134 is independently eligible for listing in the National Register of Historic Places.